It's that time of year when I again break out the glasses of enforced sunny optimism.  The mercury is dropping, yet the sun is even more mercurial in making its appearances.  On days like today, I need to keep the legs warmer than I would have to on a summer day, but still want to go sans knickers.  I've found Bag Balm to be an inexpensive and indispensable tool in the box for such occasions.  Yes, that which was originally designed to prevent cows' udders from chapping also makes a fine wind and moisture barrier for the thighs and knees on coolish spring and fall days. 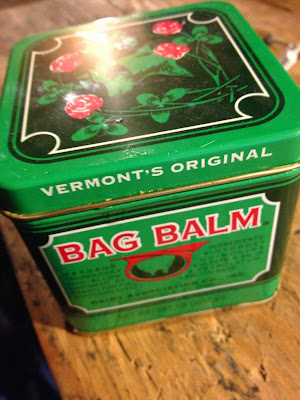 The lanolin based product doesn't really warm the legs from the outside the way more specifically designed embrocations do, but it does form an effective barrier against rain and wind.  This lack of warming, pays dividends; however, as the stuff can also be used as a chamois cream.  It's also very inexpensive compared with some of the artisanal embrocations and creams out there.  The stuff is thick and gooey and stays where it's put, whether that be the legs or undercarriage.  And last but not least, extending the time of year into which I can go on rides bare legged helps keep the tan lines sharp.