This year, I scheduled a trip down to Tampa, Florida for Christmas with my family.  Upon seeing that the weather forecast for the week or so that I'd be there was for high temperatures in the 70's-80's, I was unable to resist the temptation to rent a bike and get some miles in.  A google search found City Bike in downtown Tampa, who kindly obliged me with a 58cm Jamis Ventura, which was adequate for the task and cost about $160 for the 10 days I'd be there.  They set it up with my pedals, and once I got to my sister's where I was staying, I went to setting the seat and handlebars to their correct positions.  I would rent from them again the next time I'm in the area for an extended period.

My sis's house is actually just north of Tampa, near the Hillsborough/Pasco county line, and as this was my home base, all of my rides in the area were in the north end of Tampa.

Florida is flat.  The first real ride I did that wasn't just exploring the neighborhood was up to San Antonio, which folks assured me was the hilliest terrain around.

It was a fairly nice ride, and once I was able to escape the 6 lane divided highway arterials that are ubiquitous throughout the area and get onto some nice rural 2 lane road, the scenery was nice and pastoral.

There is even a seminary along the way called St Leo's.  It is telling that the elevation gain on this hilliest of area rides is about as much as the flattest routes around the Seattle area.

The longest ride that I did was along the northern section of the Suncoast Bike trail.  I drove up to the northern end of the trail and started there, as there were storms coming in from the south that day and winds were out of the south at about 15-20 knots.  I much prefer having a tailwind on the way home during a long ride, and given the distance, and strength of the wind, this turned out to be a good decision. 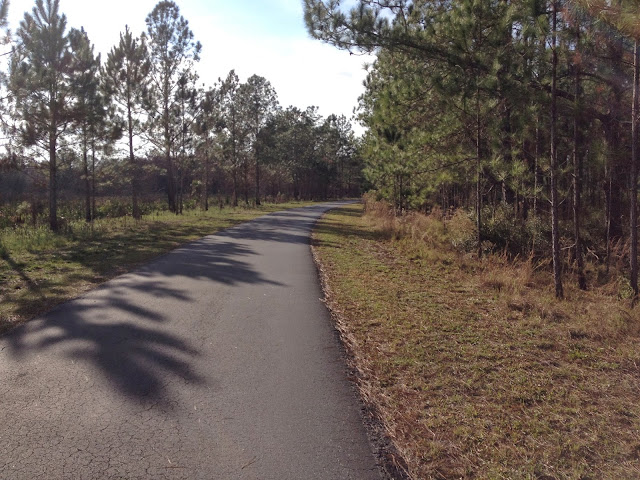 The trail was very sparsely used, I encountered about 5 cyclists over the entire 50 mile route

I also discovered the aptly named Flatwoods Park, which is situated between Bruce B Downs and Morris Bridge roads to the northeast of Tampa proper.  I did a couple of rides here, the first day doing the south end of the loop and using it as a connection to continue south on Morris Bridge road.  On the second day, I took off on a dirt spur that seemed to be on top of a flood control dike.