While wintertime in the Seattle area is often correctly characterized as being quite damp and cool, one does not always have to go out riding in the humidity.  On this day, while it was raining buckets in the lowlands, I decided to head up to the higher elevations where the rain would turn to snow. 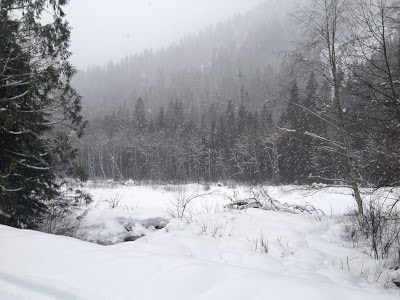 For my first cross country ski of the season, I typically take it slow and don't go too far, in an effort to ease the old corporeal body into the new activity.  Muscles that haven't been used since last February or so are called into use and sometimes complain. 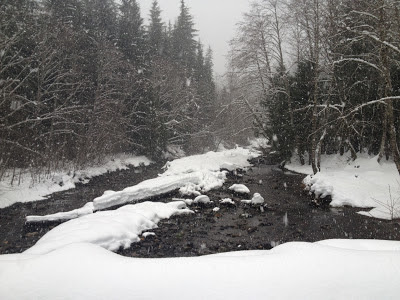 This plan of taking it easy was dashed by improving snow conditions as I went higher and further along the Mountain Loop Highway, climbing up to near Barlow Pass from the road closure gate at Deer Creek.  Initially, the snow was crusty and icy, as well as being packed down by snowshoers, walkers, and snowmobiles.  But fresh stuff was falling from on high, and it just kept getting better and better. 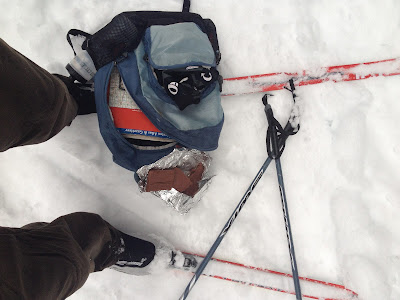 I stopped to refuel before turning around to head back down.  Mmmmm.  Fudge.  Super calorie dense sweets like this are made for those days when one is burning calories not just from the exertion, but to stay warm as well. 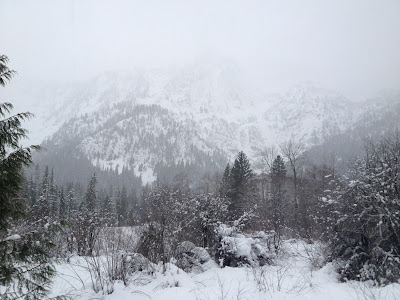 Both cycling and cross country are about getting out into nature, finding that sometimes elusive rhythm, and just going and going.  This day ended up being about a 3 1/2 hour ski, or about an hour and a half longer than I had planned.  Sometimes when the conditions are improving, one just has to keep going.  I was sore all over the next couple of days, but it was very much worth it.