Here's a link to 5 simple exercises to prevent kyphosis, 2 of which I've already been doing.

There was recently an article in Cycling Tips that points to evidence that single leg training can be beneficial.  Since the outbreak of COVID-19, I've been spending more time on the rollers and am working this back into the routine.  The feeling when switching from doing each leg independently to pedaling with both legs is that the legs feel weightless as they turn the pedals more fluidly.

Our WA State House has voted to pass a statewide network of scenic bikeways similar to those in Oregon. The bill just needs to pass the State Senate and be approved by Gov Inslee.

What excites me about this and led me to post is that, "Any person may propose the designation of a scenic bikeway route. The State Parks Commission will provide an opportunity for public comment on the proposed scenic bike route before determining a scenic bikeways designation."

What if this kind of thing leads to some kind of utopia in which some of our state's most beautiful roads have signage acknowledging cycling with education/ecouragement/enforcement for people both driving and cycling?

What routes in WA would you want to see on the list if it passes? Here's the Oregon site for inspiration.

I'd start by nominating the North Cascades Highway SR 20 between Newhalem and Winthrop and will give it some thought over the next days.

I went for cross country ski trip with the family over the Dr Martin Luther King Holiday, driving up to the cross country routes starting from Hyak off of Interstate 90.  It was a gorgeous day, with fresh snow still falling most of the way up. 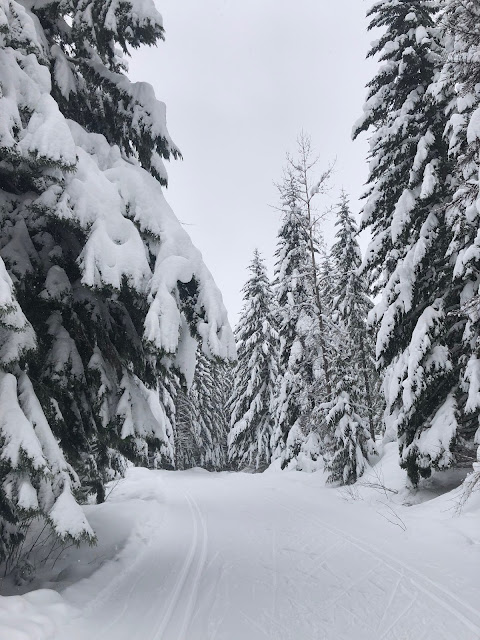 Getting the car packed up with all the gear is much more of a challenge since having the 2 year old.

As is climbing the grades while pulling Madeline and the trailer on skis.  Whether by bike or ski, this is where I'm most in my element, chugging up hill and pinning myself against my anaerobic threshold.  Fortunately, the bike/ski/jogging trailer we were able to procure from craigslist is very adaptable, and just fits in the wife's Subaru.


Generally, my motto on the descents while skiing is "fast, dangerous, and outta control," and I was somewhat worried that with all the elevation gained, it would be a difficult descent.  But getting back down was no problem, as the snow was perfectly fresh groomed.  The last time I had been on this route, it was clear and icy, which was too fast for my abilities at the time, but this time the fresh powder enabled me to carve wide curves and get around the switchbacks as needed.

There are several things I want to accomplish cycling wise over the course of the new year, so I’m boldly setting a marker in what passes for stone these days in the form of this post.

I will be headed to the big island of Hawaii in February, so naturally, I will want to bring my bike with me and try to ride Mauna Kea.  This is one of the biggest climbs in the world, from sea level to ~14,000’ though we are staying at an AirBNB in Waimea, which is on the northern half of the island but not at sea level.  Given my poor form and mileage totals, I will have to ramp up my mileage in a steady and sustainable way early in the year.  I’m not sure I’ll be able to make it all the way to the top, the important part of the goal for me is to try hard enough to be satisfied with the effort and preparation.

From there, I will have to come down from the summit, in the words of Rene Daumal, back to the reality that it will still be cold and dreary February in Seattle upon my return.  However, the days will be starting to lengthen, and after some recovery, I will set my sights on having a good rest of the year riding.  The goals for this being what eluded me in 2019, to build form steadily and sustainably.  I’ve been experimenting with a new tool in this regard, which is taking and logging my orthostatic heart rate each morning to assess how rested or tired I am.  Over the month that I’ve been self-assessing with this I’ve had the orthostatic rate range from a low of 6 when I felt really sick to a high of 40 after several healthy days of rest.  I’m still working on developing the right ranges for myself but it seems like 20 is about the minimum it should be to go out and ride.

I’m looking forward to the challenges of putting this new knowledge into practice in 2020!

2019 had lots of setbacks and challenges for me, and it’s important to me to both acknowledge and learn from them.

I fell short of my mileage goals again this year.  Part of that may be that I had set the bar too high at 5,000 miles, but I also like setting goals that are a stretch for me.  Falling short was mostly due to 4 factors:  having a two year old in the house, remodeling / moving, weather, and a persistent hip / hamstring issue.  While the toddler is pretty self-explanatory in terms of limiting time on the bike, the other factors combined to make the year less than ideal from a cycling perspective.  In February we had a very unusual for Seattle weather where there was snow on the ground for most of February.  This resulted in not getting a winter base of training that increased steadily into the spring and summer.

I was also remodeling our home during the late spring, doing much of the painting myself, and finally moved in during the early summer.  The painting, moving, organizing, and arranging also took a toll, using energy that I could have used riding more.  By June, we were finally moved in, and this saw my mileage increase rapidly, as I had been aching to get more time on the bike up until then.  At first, it felt great to be getting the miles in finally; however, by about mid July, I started having tightness in my hamstrings that wasn’t just temporary soreness.  So I missed some of the best riding times of the year in August and September while alternately trying to rest my legs and get out there again.  Finally, in October, I began seeing a PT and bike fitter, who showed me that my glutes weren’t activating fully.  He prescribed me some exercises and refitted my #1 bike, but also suggested that one of the reasons was a lack of cross training.  Thinking back, in prior years, I had done different activities, such as hiking, cross country skiing, basketball, and tennis which balanced out the time riding.  Since having my daughter, I had come to concentrate only on cycling to the exclusion of these other balancing activities.

There are some great lessons in here for my overall health going forward, and I will follow up with another post later this week on my 2020 goals which will include these lessons learned.